‘Ladies and gentlemen, welcome to Kabul. Please remain seated with your seatbelts on until the airplane comes to a complete stop and the pilot switches off the light. On behalf of Safi Airways I thank you for flying with us’ was a female voice only in English with an Eastern European accent. This was the first time I flew to Kabul at night, the airport used to lack the 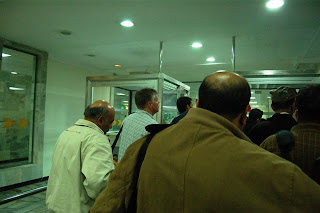 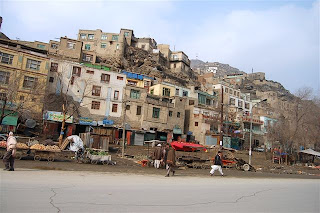 aircraft during the flight that need repair or correction. The mechanics read and correct the problem, and then respond in writing on the lower half of the form what remedial action was taken, and the pilot reviews the gripe sheets before the next flight. Chatakball recited some actual logged maintenance complaints and problems as submitted and the solution recorded by maintenance engineers. Problem; Something loose in cockpit. Solution: Something tightened in cockpit. Problem: Evidence of leak on right main landing gear. Solution: Evidence removed. Problem: landing gear grease volume unbelievably high. Solution: landing gear grease volume set to more believable level. Problem: Number 3 engine missing. Solution: Engine found on right wing after brief search. Problem: Aircraft handles funny. Solution: Aircraft warned to straighten up, fly right, and be serious. Problem: Left inside main tire almost needs replacement. Solution: Almost replaced left inside main tire.
From ‘grease my palm’ to ‘oil-fill my bellybutton’: corruption has penetrated the political, economic, judicial and social systems so thoroughly that it has ceased to be a deviation from the norm and become the norm itself. Corruption had existed ever since Taliban regime was toppled but it has reached a historically record breaking level. Ordinary Afghans are well aware of this, the majority of the country is sorry, not because it existed but they are not in a position to benefit from bribery. Corruption has become so endemic that it is perceived as normal. Nothing is possible at the same time everything is possible. When a job comes to a standstill it doesn’t mean there is a problem with the job, it is time to grease up some bellybuttons. If one is prepared to pay as much as needed then anything could be done. Shortcuts are introduced if one is willing to compromise. I could have thought of any word as synonyms for bribery but not compromise. A friend who has just set up a real estate agency had to participate in a week long training at the ministry of finance to learn the basics of the trade. At the end the attendants were given a log book to register their deals on which they have to pay a 1 percent tax. After thorough training the tax lawyer brought another book. It is called the shortcut book, trades registered in this book wouldn’t be taxed. The lawyer said, thorough training on the shortcut will be held in his private centre for which he left some business cards. Farsi and Pashto languages are rich with euphemisms for bribe. My favourite and all time fresh is ‘Shirini’, the sweetener. It is generally used when you got something done. In other words shirini is post bribery bribe. It might sound confusing but for ordinary Afghans it makes perfect sense. I went to register to vote the other day. The guard at the gate didn’t let me in. Apparently, I was late. After brief conversation he told me to go in and check for myself; not very surprisingly the registration centre was open. I came to inform the policemen at the gate. They laughed and said; of course, they were aware. If they let everybody in the place 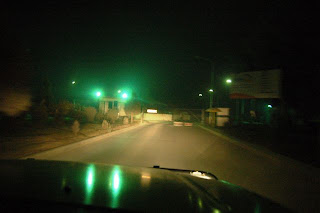 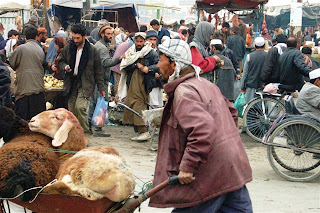 determination and rightfully enmity to Jews. There was little information about Germany, war or Hitler; the arguments are crowded with a lot of misinformation. Exactly this point is problematic when you are trying to be pragmatic and talk about daily life. Coca cola is perceived to be good for stomach-ache or Mumbai attacks were orchestrated by Americans or to have normal sexual relation a man needs four women; the last point is in Quran and scientifically proven. You can’t have a conversation about it; it is either this way or any other view point is simply misguided. Often the underlying reason for such statements of fact lies somewhere else. When someone comes out to argue one man can only be sexually satisfied by four women, quite often the arguer is not a horny person. He believes so because his grandfather had four wives or Jews are monogamist or his wife has period today.
The reason for the persistent corruption is not that Afghans are genetically programmed to pay bribes or they are morally twisted, but that the state sees them as its vassals rather than its masters. The job of Afghan law enforcers is to protect the interests of the state, personified by their particular boss, against the people. in the face of persistent corruption Afghans turn to God for assistance; Taliban are now playing the representatives of God. Story has it Little Ahmad wanted 1000Afs badly and prayed for two weeks but nothing happened. Then he decided to write God a letter requesting the 1000Afs. When the postal authorities received the letter addressed to God, Afghanistan, they decided to send it to President Karzai. President Karzai didn’t know what to do with it and forward it to President Bush. Bush as God’s rep on earth was so impressed, touched, and amused that he instructed his secretary to send Ahmad a 100 Afs note. Bush thought this would appear to be a lot of money to a little boy in a place where they never have money. Ahmad was delighted with the 100AFs and sat down to write a thank you note to God, which read: Dear God, Thank you very much for sending the money, however, I noticed that for some reason you had to send it through Bush and Karzai offices and, as usual, those crooks deducted 900Afs. Thanks, Ahmad.
Electricity: the power situation is dire. It has been almost a week since I have been here but 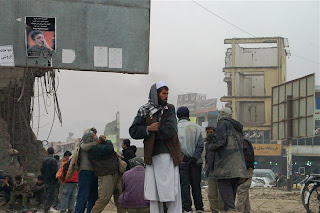 there is no electricity, it comes and goes for less than a minute and it is very weak; it can’t be used to switch on the television. While in London one would hardly consider lack of electricity as something which would affect your life like security does. The security is not deteriorating but electricity is equally important. There is a growing kidnapping industry which targeting Afghan. On average more than three Afghans are kidnapped every week. Hundreds of businessmen have been kidnapped; a number of them have been killed. Taliban threat is serious. I am going to Islamabad via ground and I have to think real hard not to get caught. Burglary is on the rise, throughout my neighbourhood one end of streets are blockaded in order to direct the traffic into the main road. Burglars general avoid main road and their favour route of escape is through back streets.
One can’t make a lot of adjustment to adapt to insecurities while some serious changes need to be made into lifestyle in order to accommodate to the darkness and cold. I have to cut on the number of hour I work, read, play and stay awake in general. I spend at least three hours every night chilling in my bed, wondering off into the world of my imagination. I can’t stay out of my bed after 9pm; it is cold and dark and it is too early too sleep. My watchful eye sometimes follows the gigantic beam from NATO searchlight in the newly built garrison close to my place. Nato searchlights provide lighting for the main street, but I would rather stay at home when it is late, the dog pack from the neighbourhood doesn’t like me much. Houses on the hillside closer to the garrison enjoy 24/7 power. I suppose the base want to grease their bellybuttons to create a friendly human shield. The government has announced that the city should expect a minimum of three months blackout. The hydroelectric damns are out of water and talks to import power from central Asia collapsed. Somebody didn’t make enough money and called the deal off. Cable Poles were installed all the way to Kabul and cable work had started. Some poles have already been sawed off. I suppose I should work on chilling out. It is something I don’t mind to do. Thinking is fun, although I won’t get to enjoy, enjoying is physical. Thinking brings a feeling of satisfaction sometimes accompanied by a settled thrill. I am happy in general. Life is engaging nevertheless there is not much for interaction. The outside has little effect on our happiness, the secret lies in our perception and making use of it. some don’t need much to make use of it.
Captions:
Kabul: west Kabul; lack of electricity mean no water for these houses. Hundreds have been forced to leave due to severe water shortage. A phenomena not new but has never forced them out.
Kabul (1): a westerner followed by his Afghan escort is cutting in front of the line to leave passport control.
Kabul (2): security has been tightened around the airport. Concrete barriers have replaced the stop sign.
Kabul (3): Eid requires every Muslim family to sacrifice a sheep. Not good for the sheep, good for me. I got to organise quite a few barbecues.
Kabul (4): signs of 90s civil war are still visible in central Kabul.
Kabul (5): these kids work on eid days in order to make 120Afs or no food for their family.

Kolkata’s one of the best web design company, AceSoftech offers web site design, web development and search Engine Optimization at affordable prices. The Ma Kolkata web design company has designed and developed websites from around the world. Acesoftech is known among clients for its quality and professional services. Our low prices and timely completion of the project has made ispopular.Kolkata web Design