a poem for pushkin 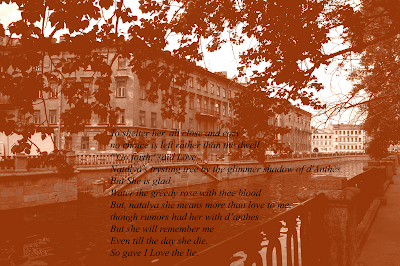 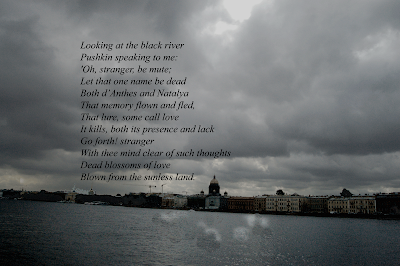 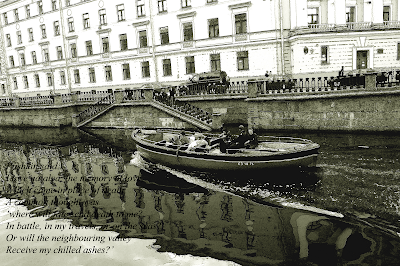 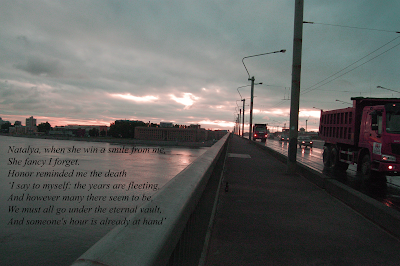 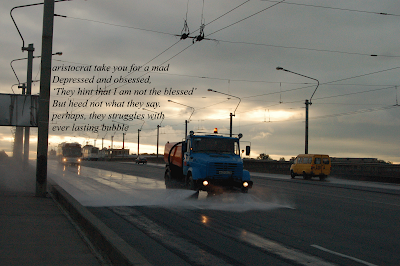 Seek of death in love of honor

To shelter her, all close and cozy no choice is left rather than the dwell
"'Go forth,' said Love
Natalya’s trysting tree by the glimmer shadow of d'Anthès
But She is glad,
Water the greedy rose with thee blood
But, natalya she means more than love to me
though rumors had her with d’anthes
But she will remember me
Even till the day she die.
So gave I Love the lie.

Looking at the black river
Pushkin speaking to me:
'Oh, stranger, be mute;
Let that one name be dead
Both d’Anthes and Natalya
That memory flown and fled,
That lure, some call love
It kills, both its presence and lack
Go forth! stranger
With thee mind clear of such thoughts
Dead blossoms of love
Blown from the sunless land.

Pushkin said:
I owe natalya, the memory of love,
Which came in place of death,
A common thought was
‘where will fate send death to me? In battle, in my travels, or on the seas? Or will the neighbouring valley Receive my chilled ashes?’

Natalya, when she win a smile from me,
She fancy I forget.
Honor reminded me the death
‘I say to myself: the years are fleeting, And however many there seem to be, We must all go under the eternal vault, And someone's hour is already at hand’

aristocrat take you for a mad
Depressed and obsessed,
‘They hint that I am not the blessed’
But heed not what they say.
perhaps, they struggles with
ever lasting bubble

Pakistan Is Going Down the Road of the Shah's Iran

The Bush administration has blown chances to capture or kill Osama bin Laden, to win wars in Afghanistan and Iraq, and now to have any chance of maintaining a stable nuclear-armed Pakistan. Like U.S. policy toward the shah's Iran in the 1960s and 1970s, the Bush administration, despite a rhetorical commitment to spread democracy around the world, has put all of its eggs in the basket of an autocrat unlikely to survive – in this case, Pakistani President Pervez Musharraf. Although Musharraf uses the U.S. war on terror and desire to get bin Laden to play the United States like a fiddle, the Bush administration's reasoning is that alternatives to Musharraf are worse. If the United States keeps solidly backing Musharraf, however, things could get much worse than even bin Laden using Pakistan as a haven: a nuclear-armed Pakistan controlled by radical Islamists. Unfortunately, Pakistan probably has already been "lost," and U.S. policy has played an important role in its demise. U.S. policymakers have repeatedly underestimated the consequences of the deep unpopularity engendered by profligate U.S. government meddling in the affairs of other countries. In Iran, although the shah's government was brutal, the regime also became so identified with its unpopular U.S. benefactor that this became a major contributing factor in its collapse and replacement with a militant and enduring Islamist substitute. The Bush administration, with its macho bravado, especially has had a tin ear for the ramifications of anti-U.S hatred. After 9/11, instead of scheming to use the attacks as a justification to go after Saddam Hussein's Iraq, the Bush administration should have eliminated the Taliban regime in Afghanistan, used enough U.S. forces to get bin Laden instead of relying on unreliable Afghan fighters, taken full advantage of Musharraf's limited-time offer to give the U.S. military free reign in Pakistan to hunt down bin Laden and al-Qaeda, and then withdrawn from the region. Instead, the Bush administration allowed mission creep to take its eyes off the prize of taking down al-Qaeda. The U.S. mission in Afghanistan turned to nation-building, counterinsurgency, and the stanching of the drug trade. The occupation of Afghanistan by non-Muslim forces and close U.S. support for the dictator Musharraf in neighboring Pakistan predictably revved up Islamic militants there and gradually turned them against his regime. In an attempt to discreetly court these militants to support his government and to maintain the flow of U.S. military aid to ostensibly fight them, Musharraf allowed these groups to operate in the wild tribal regions of western Pakistan on the Afghan border and even reached a truce with them that withdrew the Pakistani government's military forces from these areas. This wink and nod has allowed both al-Qaeda and the militant Taliban to recover and reenergize themselves what are now essentially safe havens. The stepped up Taliban attacks on U.S. forces in Afghanistan can be explained by the continued U.S. occupation there and the havens given to them by Musharraf. Given Musharraf's unenthusiastic pursuit of al-Qaeda in Pakistan, why does the United States continue to support him? The answer is mainly out of fear of "instability" – read any change in a nuclear-armed country. The United States, with its sprawling informal empire, tends to be status-quo-oriented, as evidenced by the Bush administration's failure to take advantage of the only way out of Iraq – the radical decentralization or partition of that country. The United States fears that the only alternative to Musharraf in a nuclear-armed country is the Islamic militants; but this outcome is the most likely if the unpopular United States continues to back Musharraf so closely. Musharraf has faced mass protests across Pakistan for his increased despotism and his suspension of the country's chief justice. Musharraf feared that the judge, Iftikhar Muhammad Chaudhry, could issue rulings that would interfere with his attempt to have the parliament elect him to another five-year term. Also, several former generals have talked openly about overthrowing him in a coup. Yet they might not be able to control any coup and reestablish military rule. The Islamists have been strengthened by Musharraf's suppression of alternative non-Islamic opposition parties; Musharraf has said that their leaders – exiled former prime ministers Benazir Bhutto and Nawa Sharif – will not be allowed to return for upcoming parliamentary elections. Instead of the disastrous policy the Bush administration has pursued, it should end the occupation of Afghanistan, which would cool the Taliban resurgence in Afghanistan and Islamic militancy in Pakistan. In addition, the United States should threaten to cut off aid to Pakistan unless Musharraf and his intelligence services make a genuine attempt to capture or kill bin Laden. With a cooling of militant Islam in the region, brought about by a U.S. withdrawal, Musharraf should have more leeway to pursue bin Laden without an Islamist backlash. Finally, the United States should press Musharraf to open the elections to non-Islamist oriented parties and allow their leaders to return from exile. These actions would further bleed support from the Islamist radicals. Unfortunately, keeping the Islamists around, but contained, has been good for the autocratic Musharraf regime. The problem is that the instability caused by this policy can no longer be contained. Like the shah of Iran, Musharraf must use increased violence to put down popular protests, thus further fueling the spreading uprisings. The shah's Iran and Pakistan have one important difference, however: Pakistan has nuclear weapons. Tragically, the Bush administration may eventually give the world an Islamist bomb.
No comments: Links to this post