UK to send judges for Sharia training to the Taliban

Recently the Anglican Church [Archbishop of Canterbury Dr. Rowan Williams] expressed that there was nothing wrong with the British legal system adopting some laws from Islamic shari'a and implementing them for British citizens of the Islamic faith.

The UK and the rest of civilized world has been accused of hypocrisy before in their support of regimes such as Karzai in Afghanistan which is implementing Sharia law, the entire legal system of Afghanistan is based around Sharia. This comes contrary to any human right value and the secular notions which exist in UK and Europe. an Islamic system include shari'a criminal law – that is, punishments such as killing the apostate (a Muslim who converts to another religion), amputating a thief's hand, cutting off a brigand's opposing hand and foot... stoning the adulterer to death, publicly flogging wine drinkers, killing homosexuals by throwing them from a high place, or allowing a relative of a [murder] victim to deal with the murderer, instead of the state. This is the system supported by UK in Afghanistan but Archbishop of Canterbury want to introduce it in Europe. This is the first time a high ranking religious figure in Europe expresses support for Sharia inside Europe. An Islamic legal system in Europe as suggest by Anglican Church would mean:

"1) Permit polygamy for European Muslim citizens, and not punish them for it – even though this is considered criminal under European law;

"2) Permit European Muslim citizens to beat their wives to discipline them, as the Koran urg 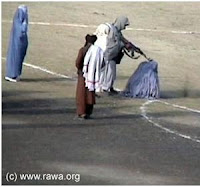 "3) Allow men to unilaterally decide to divorce without requiring any court proceedings, as this is a right guaranteed to men by shari'a;

"5) Not consider women's testimony the equal of men's in shari'a courts;

"6) Deprive a divorced woman of custody of her children if she remarries;

"7) Allow European Muslim citizens to marry in traditional marriages without the need to officially register these marriages;

"8) Eliminate adoption, since it is contrary to shari'a;

"9) Force a woman whose Muslim husband converts to another religion to divorce him, because he is an apostate;

European countries will never accede to these catastrophic demands, for reasons more practical than humanist. If so, why does the statement of the Anglican Church matter? the fact that they were proposed by the British archbishop sends the wrong message to the Islamic world. The gist of this message is that there is no contradiction between Islamic shari'a and Western civilization if shari'a applies only for Muslim citizens. To absolve itself of responsibility in the eyes of fundamentalist Muslims, who will be persuaded by the Church's statements that the clash is not between Christians and their Church on the one hand and Muslims on the other but a clash between Muslims and the secular states. This will create greater hostility among Muslim citizens of European countries to their host countries, and will lead to increased violence and terrorism in the future…

These statements by the Archbishop of Canterbury also mean that the Church – or at least part of it – still does not believe in human rights legislation, and takes every opportunity to cast doubt on the universality and comprehensiveness of the humanist principles.

Although the demands announced by the bishop are far from implementation in a Europe that long ago distanced itself from medieval values and thought, the reverberations of these demands will have a grave impact on the Islamic world. fundamentalist in places like Afghanistan are picking fights with the liberals who can’t dare to oppose sharia openly, and their attitude is: 'How can you oppose shari'a law in your own countries when we see that the Anglican Church is seeking its implementation in Europe?'

more about this topic in the Arab liberal e-journal Elaph.

It is claimed that Islamic societies have fewer incidents of fornication and adultery because of strict laws or customs, for example, women wearing veils over their faces or keeping separate from men in social settings. But these results of fewer incidents of sexual 'crimes' may have unanticipated negative effects in other areas, such as the oppression of women. Generally, sharia restricts women's social mobility and rights, the more closely sharia is followed. For example, in conservative Saudi Arabia women are not allowed to drive cars.