Afghan Ambassador Omar Samad and Panamanian envoy Romy Vasqez de Gonzales have been voted the sexiest heads of mission among the diplomatic corps in , according to the results of Embassy's first ever Sexy and Savvy survey.

When reached for comment, Mr. Samad said he was thrilled by the results and the "flattering votes."

"This honour will surely make my heavy workload a bit lighter," he said. "Even though diplomacy requires thinking twice before saying anything, I will use a Charles Dickens quote to express my appreciation: 'Humble we are, humble we have been, humble we shall ever be.'"

In addition to being the hottest male envoy, Mr. Samad was also voted as the hardest working ambassador in the city.

"I don't think there are any secrets associated with being nominated or
winning, but I do believe in living one's life with passion, enthusiasm and
a sense of humour," she said in response to her nominations.

Those who are familiar with Panamanian Ambassador Romy Vasquez de Gonzales on the diplomatic party circuit know the stunning, dark-haired diplomat deserves the accolade of sexiest female envoy. But beauty is not the only
hing voters found appealing in the Panamanian ambassador. Those polled also thought she was one of the foreign diplomats most in the know of political gossip, an honour she tied for in first place with British High Commissioner Anthony Cary, which itself is remarkable because the Brit has only been in town for four months. Ms. Vaquez was also runner up for the coveted title of
female ambassador with the best hair, in addition to tying in third place for the best-dressed female envoy.

Still in the sexy category, this time for male heads of mission, Austrian 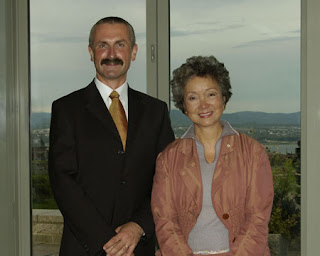 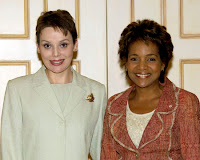 Vasela Mrden Korac took third place.
Vasela Mrden Korac of may be the tallest female envoy in town, at least an inch or two above everybody, but she beat everyone hands down in
the category of best-dressed female envoy; garnering 30 per cent of the vote.
British High Commissioner Anthony Cary snagged first place in the

best-dressed male ambassador category. "I am very flattered as my family is incredulous that I should be considered well dressed," he said. "My success in this category can only be attributed to my high commission's savvy in manipulating the poll."

Siguté Jakstonyté of ; Elena Stefoi of ; Slobodanka Kojadinovic, the Serbian chargé d'affaires; and Ingrid Iremark of tied for second place, each with 8.3 per cent of the vote.

With Russian President Vladimir Putin's recent open criticism of 's foreign policy, it ould be correct to say there's a little chill in relations between both countries. But in , there is a warmth between the former Cold War enemies generated by their envoys' shared sense of
humour. Ambassadors Georgiy Mamedov of and David Wilkins of the both tied for first place as ambassadors with the best sense of humour. The aforementioned Mr. Smith of the and Stanislav Opiela of followed the pair closely.

Interestingly, Messrs Mamedov and Wilkins also share the dubious title of ambassador with the corniest jokes, garnering a larger percentage of votes in this category than the Best Sense of Humour one.

Men tend not to fuss about their hair as much as women do, unless of course their hairlines are receding. But if the votes are anything to go by, one might assume that Norwegian ambassador Tor Berntin Naess spends a fair amount of time at the hairdresser. Regardless, survey respondents thought
the Nordic gentleman has a pretty impressive set of locks, and crowned him s the male ambassador with the best hair in town.

For Caucasians, women with blonde hair have always had a special allure, so it was no surprise that in the female with best hair category, Mrs. Korac of , was voted in first place. But brunettes have lots of fun, too, as Mrs. Vasquez of proved, clinching second place, while Slobodanka Kojadinovic, chargé d'affaires of –another blonde from Eastern Europe–won third place.

If there is anything that defines diplomats, it's their knack for throwing parties and lunches, where a suit and tie is the formal dress code. So what is a diplomat without the cocktail parties and the lunches? In that regard, Embassy thought it would be wise to include a category called ambassador with the best business lunches.

Not withstanding the fact that is a tiny island, whose office in isn't in fact an embassy proper, its representative, David Lee, was voted as the ambassador who throws some of the best business lunches, according to those polled in the survey.

"I have been in the [diplomatic] business for over a quarter of a century. For me, I always do my homework," he said when told he's the best in hosting business lunches. However, the soft-spoken and modest diplomat said he's flattered as well as surprised at the honour because he's just been in for less than four months.

Embassy intern Paul Ovens conducted the first annual survey by phone, fax and email from July 4-27. After contacting all 125 foreign missions in , as well as dozens of members of Parliament, senators, academics, journalists, think-tanks and others familiar with the diplomatic community, he received more than 54 responses.

"Many respondents laughed out loud at the first questions [who is the sexiest male and female ambassador?]," said Mr. Ovens.

Mr. Ovens said some respondents preferred answering questions on the opposite spectrum to what he asked.

yea i read it in embassy magazine. interesting.