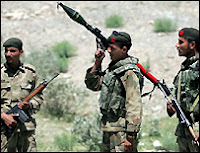 A group of 75 Taliban militants tried to overrun a U.S.-led coalition base in southern Afghanistan on Tuesday, a rare frontal attack that left more than 30 militants dead, the coalition said in a statement.The insurgents attacked Firebase Anaconda from three sides, using gunfire, grenades and 107 mm rockets, the coalition said.

A joint Afghan-U.S. force repelled the attack with mortars, machine guns and air support."The inability of the insurgent forces to inflict any severe damage on Firebase Anaconda, while being simultaneously decimated in the process, should be a clear indication of the ineffectiveness of their fighters," said Army Capt. Vanessa R. Bowman, a coalition spokeswoman.A direct attack on a U.S. or NATO base by insurgents on foot is relatively rare.

More often insurgents fire rockets at bases and flee. Military officials say that Taliban fighters know they can't match the American military in a heads-up battle, which leads the insurgents to more often rely on roadside and suicide bombs, similar to the tactics being used by militiamen and insurgents in Iraq.