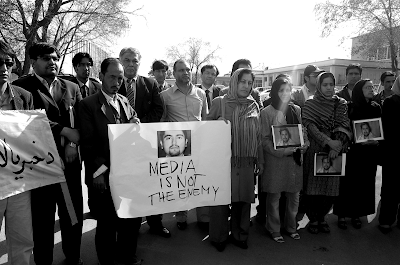 We would like to take this opportunity to bring to your kind attention Kamran Mir Hazar’s case, after his unlawful arrest by the NDS on 4th July 2007 he was referred to media complaints and violation commission for assessment of the alleged violation. The commission issued its verdict on Thursday 9th Aug and sent their conclusion to Kamran on the same day.

On that same day Kamran was kidnapped by NDS again for questioning and intimidation. This is despite the resolution of media commission which didn’t find Kamran in direct violation of the law.

Unfortunately, despite the fact that NDS sent the case to the commission for consideration and he was released from NDS jail, bailed out by journalist union, he was re-arrested by the NDS. In the one month period when the media commission was assessing his case, Kamran was under surveillance by NDS and he remained under illegal house arrest by the NDS.

The Ministry of Information and Culture and the Commission, which, is responsible for the implementation and safeguarding of the media law and freedom of speech showed no reaction to aforementioned three violations of NDS (two illegal arrestments and one month long house-arrest and surveillance)


If the Afghan government and the media commission do not take any action, the journalists will have no option but to launch mass protest at national and international level against NDS, in the framework of Afghan law.