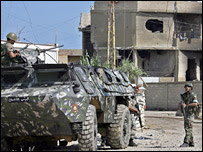 A Polish officer was killed during an attack on a military convoy in eastern Afghanistan on Tuesday, making him the first soldier from Poland to be killed in the Afghan mission, the defense minister said.
2nd Lt. Lukasz Kurowski, 28, was killed in an exchange of fire some 20 kilometers (12 miles) southeast of a base in the city of Gardez, Aleksander Szczyglo said on TVN24 television.
Kurowski was immediately taken to a hospital, but died on the way, Szczyglo said.
He is the first fatality among the 1,200 troops that Poland has stationed in Afghanistan as part of a NATO mission. In Iraq, Poland has reported the deaths of 21 soldiers.
Polish troops are stations in Paktya and Ghazni province in eastern Afghanistan.
A battle group of B company is stationed in Andare district of southern Ghazni. Polish troops are laying on Taliban and Alqaida communication line. Most of Taliban foreign supporters are entering Afghanistan from waziristan of Pakistan. Their route to southern Afghanistan goes pass southern paktia and andare district of Ghazni.
Polish forward basis are not under direct pressure from local Taliban but patrol remains a challenge. Going out on patrol means a good chance of coming across a militant caravan.

i am also hearing reports that there was an attack on foreign troops in kabul. according to kabul police cheif the attack happened fifteen minutes ago and three german soldiers has been killed

it's unclear yet, if it was a mine or a suicide attack.