Explosion in Afghanistan against German 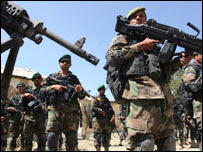 : An explosion against a two-vehicle convoy of German troops killed three soldiers Wednesday on the outskirts of the Afghan capital, preliminary police reports said.

NATO's International Security Assistance Force said it was aware of an explosion near a military base but didn't know how many casualties there were.

Eyewitnesses at the scene of the attack said two German SUVs were driving on a gravel road when a mine exploded. Helicopters arrived at the scene and took three bodies away, the eyewitnesses said.

Later, French troops with anti-mine equipment and troops arrived at the scene. Afghan police kept reporters from getting close to the site.